We enable the rapid deployment and application of critical process improvement knowledge. Our video-based enterprise system not only provides a platform for digital and blended training but also includes an integrated Best Practice Coach for reference while on-the-job. MindPro is the most comprehensive online Lean Six Sigma training and coaching system in the world.

This amazing Knowledge Transfer System is comprised of four primary Delivery Platforms. The system can be utilized in one of the following ways:

Blended Learning utilizes a mixture of online learning and live webinars. Blended Learning provides the advantage of self-paced online learning, which allows the candidate to stop the videos for taking notes or replay the videos on topics that are not clear to them. With the live webinars, candidates have personal contact with the instructor and can ask questions and interact.

While you will be studying independently and self-paced on your own schedule, you will be required to meet specific deadlines for exams and required to attend live webinars offered at specific dates and times throughout the course.

Complete customization services available upon request. This may include a limited or unlimited number of user licenses or variations to suit the customer's need. 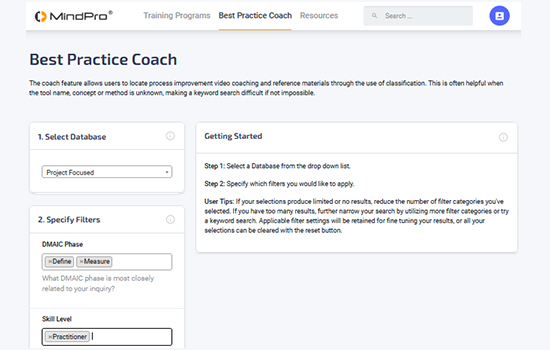 Filtered database queries that provide results in a manner consistent with search engines. These results may include coaching packets, which serve as mini curriculums, or individual media. All results are displayed in their proper learning order. 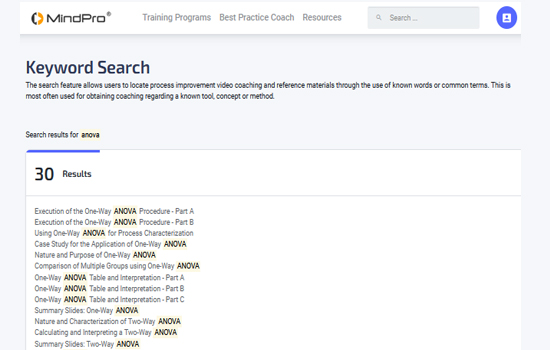 Word search capability that allows the MindPro database to be searched for known words. These results may include coaching packets, which serve as mini curriculums, or individual media. All results are displayed in their proper learning order. 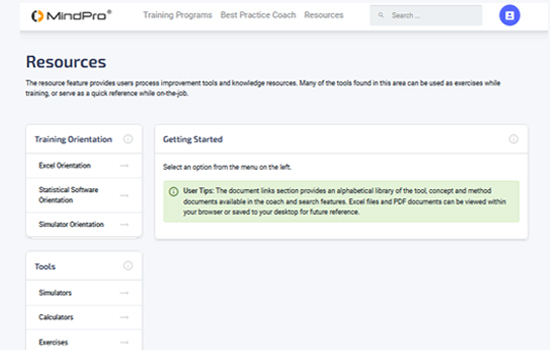 What other students turned professionals

Six Sigma has changed the way I approach every challenge. It reminds me to question every assumption and insist on facts before making decisions. Ultimately, Six Sigma has made me a more creative problem-solver because I no longer jump to one quick answer – I know how to work through the issue to find the best answer.

“Focus on the Issues”

Being responsible for the success of new products was a stressful job. Six Sigma gave me the tools to focus on the issues that needed the most attention, and it gave me the facts to represent the issues with clarity. All in all, it helped me sleep easier at night.

“Take on Any Challenge”

My job of managing an operation that was designed to Meet Six Sigma positioned me to take on any challenge, and it gave me the belief that anything is possible if you follow the logical process of the Six Sigma Roadmap.

My project was successful, but what I carry with me every day is the fact based process for working with suppliers and customers to solve our mutual problems. The bottom line is that Six Sigma increased my self-confidence.

“Changed the Way I Think”

The Black Belt learning changed how I approached not only my professional life but personal decisions as well. It changed the way I think and enabled me to face complex issues and make everyday decisions with confidence and ease.

“Address Problems in Any Area”

Before Six Sigma I relied solely on my engineering and quality knowledge to solve problems. Six Sigma has given me the ability to address problems in any area, regardless of the industry or business function involved.

I’ve taught statistical methods in industry for over 17 years. The connection of a Black Belt project with the Six Sigma roadmap was a breakthrough in training effectiveness. Students are motivated to learn because of a real-time opportunity to apply the tools.

Dr. Harry has been widely recognized and cited in many publications as the principal architect of Six Sigma and the world's leading authority within this field. His book entitled Six Sigma: The Breakthrough Management Strategy Revolutionizing the World’s Top Corporations has been on the best seller list of the Wall Street Journal, Business Week, and Amazon.com.

Dr. Harry is the Co-Creator of Six Sigma, National Best Selling Author, Founder of the Six Sigma Movement, consultant to the world’s top CEO’s and foremost expert on the subject. To learn more about Dr. Harry, examine his Professional Biography and read the Testimonials.

Dr. Harry was the COB of the Six Sigma Management Institute. As founder of the Six Sigma Academy in 1994, he served as a board member and chief executive officer. In addition, he has served on the Board-of-Directors for the International Statistics Application Institute and the International Design Institute, Singapore. Dr. Harry was employed by Asea Brown Boveri and served as Corporate Vice President, Quality Systems Deployment. As such, he was directly responsible for the global leadership, implementation, and deployment of Six Sigma at ABB. His activity was focused on the creation of world-class levels of improvement in product quality, performance, producibility, and cost.Read more...

What is Six Sigma?

Essentially, Six Sigma is a business management system that started at Motorola in the mid 1980’s and then spread to major industries, governments and institutions around the globe. Its time-proven purpose is to drive financial and quality improvements to the bottom-line of an organization. To get this done, the work is accomplished through an elite group of highly trained professionals called Black Belts and Green Belts.

These professionals plan, lead and execute value-based projects that accumulate huge, verifiable benefits for their sponsoring organization. In turn, the Black Belts and Green Belts are generously rewarded for their efforts and assume a position of high status within the organization.

MindPro® is an online Six Sigma training system. Dr. Harry and his staff worked 4 years to realize its design and function. Although primarily used to prepare, certify and support Lean Six Sigma Black Belts and Green Belts, it offers a host of other supporting programs and wide array of documentation and application tools. Through Dr. Harry’s unique Over-the-Expert’s-Shoulder training videos, as well as its many other features and benefits, MindPro® has proven itself to be an instructionally effective and cost-efficient way to deliver high quality training and certification to those that need it – anytime, anywhere, on-demand. As a matter of authoritative credibility and demonstrated success, Dr. Harry’s Six Sigma teachings have been used and endorsed by many of the world’s top corporations and institutions. His work has been widely acclaimed in numerous bedrock publications, both nationally and internationally. So, when you earn your Six Sigma credential from Dr. Harry through his MindPro® System, you can rest assured it will be highly respected throughout industry and serve as a strong testament to your Lean Six Sigma competencies. The rewards of this credential are many.

Who Can Benefit from MindPro®?

A1: Individuals. For example, business and technical professionals that desire to further their career in terms of vertical or horizontal job mobility, as well as increasing their annual income. There are several key annual salary surveys conducted each year by highly credible organizations. Year after year, the survey results clearly indicate that Lean Six Sigma Black Belts and Green Belts earn a significantly higher annual salary than their counterparts.

A2: Small Businesses. For example, a small business may not be able to remove people from their daily work responsibilities to attend live training; however, at the same time, they have a burning need to create improvements that can take their business to the next level. In such cases, the company can incentivize their high-performers to train at home. In this way, MindPro® allows a win-win situation to be created for everyone involved.

A3: Mid-Sized Companies. For example, consider a mid-sized company that can’t afford the resource and time commitments to engage a full-scale deployment and implementation of Six Sigma. In such cases, the company might consider creating a "Six Sigma Tiger Team" consisting of a few MindPro® trained Black Belts and Green Belts. If a business problem should arise, a Black Belt or Green Belt would be selected from the Tiger Team to resolve the issue by applying Lean Six Sigma methods. Following this, that person would return to his or her normal job assignment. Since they don’t use their skills everyday, MindPro® is a great tool to stay current over time or just brush-up on the Lean Six Sigma tools and methods previously learned.

A4: Large Enterprises. For example, a Fortune500 company or a government agency might be undertaking a full-scale improvement initiative using Lean Six Sigma as their primary change agent. In this case, experience has shown that the enterprise must first design and create an infrastructure of Six Sigma practitioners and leaders. In turn, those practitioners would be focused on executing high-value projects that are consistent with the organization’s business goals. Naturally, when the mass of project results are aggregated, the "needle of business" moves in a positive direction. Given such a Six Sigma Deployment and Implementation scenario, the company would want to acquire a MindPro® Enterprise License to fully support the initiative. Of interest, the MindPro® Solution can be used as a stand-alone digital training platform or used in conjunction with coaching (live or remote) to form a custom blend of learning and application resources.